Protesters call for action to prevent Bosnia sliding into war 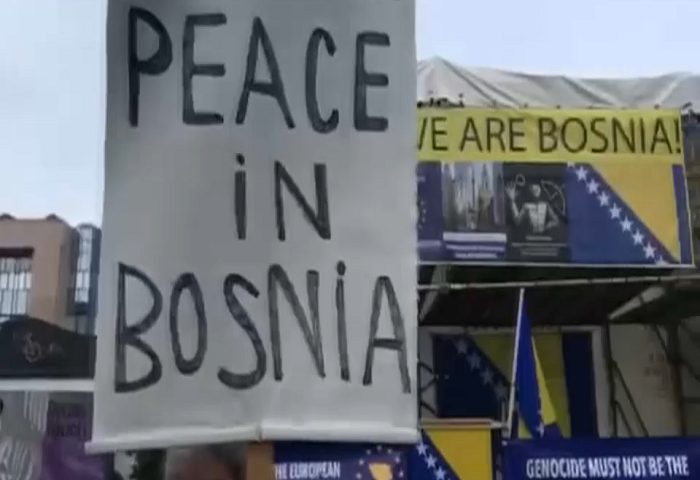 Rallies held in 14 countries over fears that Bosnian Serb moves towards secession could trigger conflict.

Demonstrators have taken to the streets in protests across Europe and in the United States to demand an end to Bosnia and Herzegovina’s biggest political and security crisis since the 1990s, as Bosnian Serbs threaten to secede and fears grow about a slide towards renewed conflict.

Protests were held in 35 cities across 14 countries on Monday – including in Sarajevo, Podgorica, Rome, Brussels, London, New York, and Washington, DC – demanding the international community to act to stop the break-up of the country.

The protests, some of which gathered hundreds of people, were spurred by Bosnian Serb leader Milorad Dodik’s moves towards secession.

Last month, the parliament of Republika Srpska passed a series of laws enabling the entity to form its own parastatal institutions and its own army by May.

Many Bosnians are alarmed as the Bosnian Serb army committed war crimes against the non-Serb population during the war in Bosnia with the aim of achieving a Greater Serbia.

Dodik’s moves, which High Representative for Bosnia and Herzegovina Christian Schmidt said were “tantamount to secession”, violate the Dayton Peace Agreement signed in December 1995 that divided the country into two entities – a Serb-led Republika Srpska entity and a Bosniak-Croat dominated federation.

“The survivors of the 1992-1995 war, who were expelled or tortured by the Bosnian Serb army in the concentration camps as well as many survivors of the Srebrenica genocide are extremely upset,” Platform BIH, the umbrella group based in the Netherlands organising the protests, said in a statement on Monday.

“The secession of Republika Srpska would be a reward to the Serbs for ethnic cleansing and genocide against Bosniaks. Many fear the country is slipping back into divisions

“[Protesters] want to send a simple message to world officials that divisions and conflicts must not happen again. They want the EU and the USA to act in time, preventively, not reactively like in the 1990s,” it said.

Bosnians and analysts have warned that the Bosnian authorities need to take urgent action to prevent secession, such as defence preparations and aggressive diplomacy.

Last week, the US imposed new sanctions on Dodik, who has already been on the US blacklist since 2017 due to Dodik’s obstruction of the Dayton Peace Agreement.

But protesters say the EU, which took over responsibility from NATO in 2004 to ensure security in Bosnia, has failed to take sufficient action in response to Dodik’s moves.

“Although the Office of the High Representative in Bosnia has the power to remove any politician who violates the constitution, current High Representative Christian Schmidt has so far avoided doing so even though Dodik has repeatedly broken the law.”

“Come up with a coordinated response, impose sanctions against Dodik and fully support reinstating peace and a solid democracy,” she said.

Organisers of the protests said they will be calling on Bosnia’s Prosecutor’s Office to prosecute all parties and individuals who violate the law.

“The West cannot put Bosnia and Herzegovina in the same position [as it was] near the end of 1991, which had parallel institutions and autonomous regions contrary to the state’s constitution,” their statement said.

“Such was also an introduction to aggression, persecution, mass war crimes, and genocide, for which many of the war criminals were brought to justice by the international courts. Today, we are looking to prevent repeating the history of the 1990s.”

Emir Ramic, director of the Institute for the Research of Genocide Canada, told Al Jazeera that Bosnia internationally recognised state borders and sovereignty are protected by international law.

“That is why there is no nationalism, no greater-state project that has the right to claim parts of Bosnia,” Ramic said.

“Tolerance and coexistence are values that Bosnia has [cultivated] for hundreds of years and this must be defended.”

The protests followed Sunday’s celebrations in Banja Luka, the largest city in Republika Srpska, where a ceremony was held for the autonomous entity’s statehood day – declared illegal and unconstitutional by Bosnia’s Constitutional Court.

January 9 marks the date in 1992 when Bosnian Serbs declared independence in Bosnia, sparking the beginning of the genocide and ethnic cleansing against the non-Serb population.

A special “anti-terrorist” police unit of Republika Srpska marched chanting, “For the cross, for the cross,” glorifying Serbian medieval rulers.

During the weekend, Bosniaks in both Bosnia and Serbia faced numerous provocations by Serb nationalists celebrating Orthodox Christmas.

That evening in Priboj, Serbia during Christmas Eve, nationalists were seen celebrating on the streets shouting, “It’s Christmas, shoot at mosques!”

Priboj, located near the Bosnian border, has a significant Bosniak population